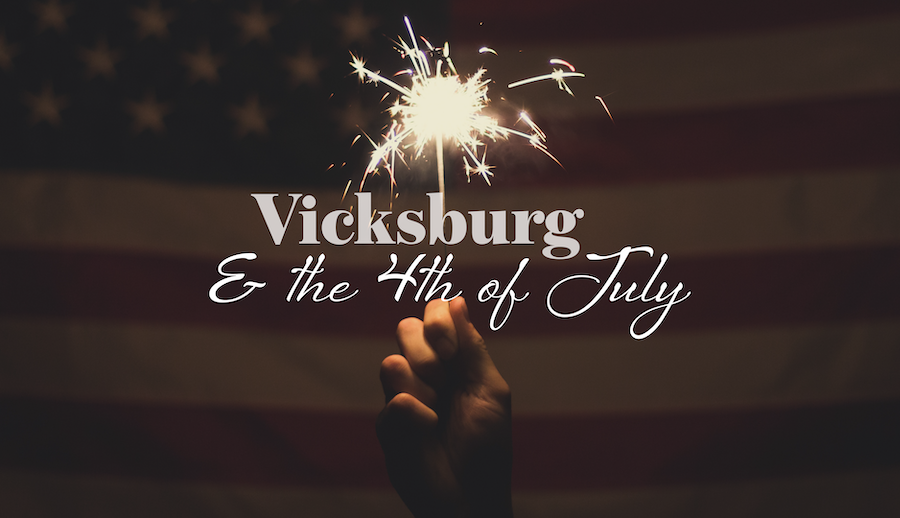 Vicksburg and the 4th of July

It was a necessary victory.

General Ulysses S. Grant, commander of the Department of Tennessee had already made several attempts to reach the Breadbasket of the Confederacy, and with each defeat, refused to give up.

Vicksburg — seizing it would be the key to winning the American Civil War. Vicksburg, where surpluses of goods and food were transported across the Mississippi and dispersed throughout the South, was necessary. Vicksburg, the town which Jefferson Davis called, “the nail-head that held the South’s two halves together.”

It wasn’t until Grant’s decision to confiscate the Confederate bastion from the town’s weakest point, that the Union would gain its upper hand.

Civilians had been warned of their imminent danger.

On March 20, 1863, Dora Miller recorded the words “leave or prepare accordingly,” in her personal diary. And though death loomed amid the smoldering haze, there were those who refused to leave.

Linda Lord, daughter of an Episcopal minister, wrote: “Before sunset a bombshell burst into the very center of the dining room… crushing the well spread table like an eggshell, and making a great yawning hole in the floor, into which disappeared supper, china, furniture…and our stock of butter and eggs.”

As shells rained down on the city, women, men, and children fled the security of home to shelter in caves. “We were almost eaten up by mosquitoes, and were in hourly dread of snakes. The vines and thickets were full of them, and a large rattlesnake was found one morning under a mattress on which some of us had slept all night,” wrote a survivor.

Vicksburg was taken under siege. The town became a prison with no escape. Food, fresh water, and medicine began to diminish. Conditions worsened. Such is war.

On the battlefield, the Confederate’s rations were steadily shrinking.

“We are indebted to Major Gillespie for a steak of confederate beef alias meat. We have tried it and can assure our friends, if it is rendered necessary they need have no scruples at eating the meat. It is sweet, savory and tender, and so long as we have a mule left we are satisfied our soldiers will be content to subsist on it.”

Those who remained were left to eat mules, dogs, cats, and rats. In her diary, Dora Miller reported, “I think all the dogs and cats must be killed, or starved, we don’t see any more pitiful animals prowling around.” Another time she wrote, “I send five dollars to market each morning, and it buys a small piece of mule meat. Rice and milk is my main food; I can’t eat the mule-meat. We boil the rice and eat it cold with milk for supper.”

The town was starving. Ammunition was fast running out. It was too late for Vicksburg. Pemberton knew it was inevitable. “It is my duty to sacrifice myself to save the army, and I therefore shall offer to surrender this army on the 4th of July.”

Shamed and disgraced on the 4th of July

Defeat would be Vicksburg’s disgrace. To make matters worse, defeat would come on Independence Day. The people were humiliated, the town broken.

Having been raised in Pennsylvania, General John Clifford Pemberton, felt that surrender on Independence Day would yield better terms for he and his men given the day’s festivities. His officers opposed the surrender, accusing Pemberton of treason. William Pitt Chambers charged “Our commanding General had been false to the flag under which he fought.”

With the Union’s victory at Gettysburg and the surrender of Vicksburg, the tide of America’s Civil War was turning. Where there had –– a weeks earlier –– appeared to be certainty of two nations severed, there now appeared a blood-stained path toward reunion.

Citizens of Vicksburg sought to rebuild their town, but for generations, hostile feelings toward the Union would remain. Eighty years would pass with no official recognition of the Fourth of July. It was not until 1945, with the festivities of the nation’s victory in World War II, that Vicksburg officially observed Independence Day again.

In 2013 the Sesquicentennial Program Series Commemorated the 150th anniversary of the Union assault against Vicksburg. The following is a clip from the Vicksburg Post:

“Tourists and locals alike crowded downtown Vicksburg…not only to celebrate the Fourth of July, but to commemorate the sesquicentennial anniversary of the end of the Siege of Vicksburg.”

A note of interest:

This morning I called the Welcome Center for Vicksburg, Mississippi. The lady I spoke with was very kind and most informative. I asked her what Vicksburg would be doing to celebrate the 4th this year. She said the evening would begin with a band concert and end with a display of fireworks. I asked her how the feelings were concerning the past with all that had happened so long ago. She was confident to tell me Vicksburg had moved on. I like that. Vicksburg has moved on and is a fine example of “from ashes to beauty”.

May your holiday be beautiful and rewarding! Happy Fourth, everyone!

All quotes were taken from Battlefields.org, and Owlcation.com, except for the excerpt from Wikipedia.